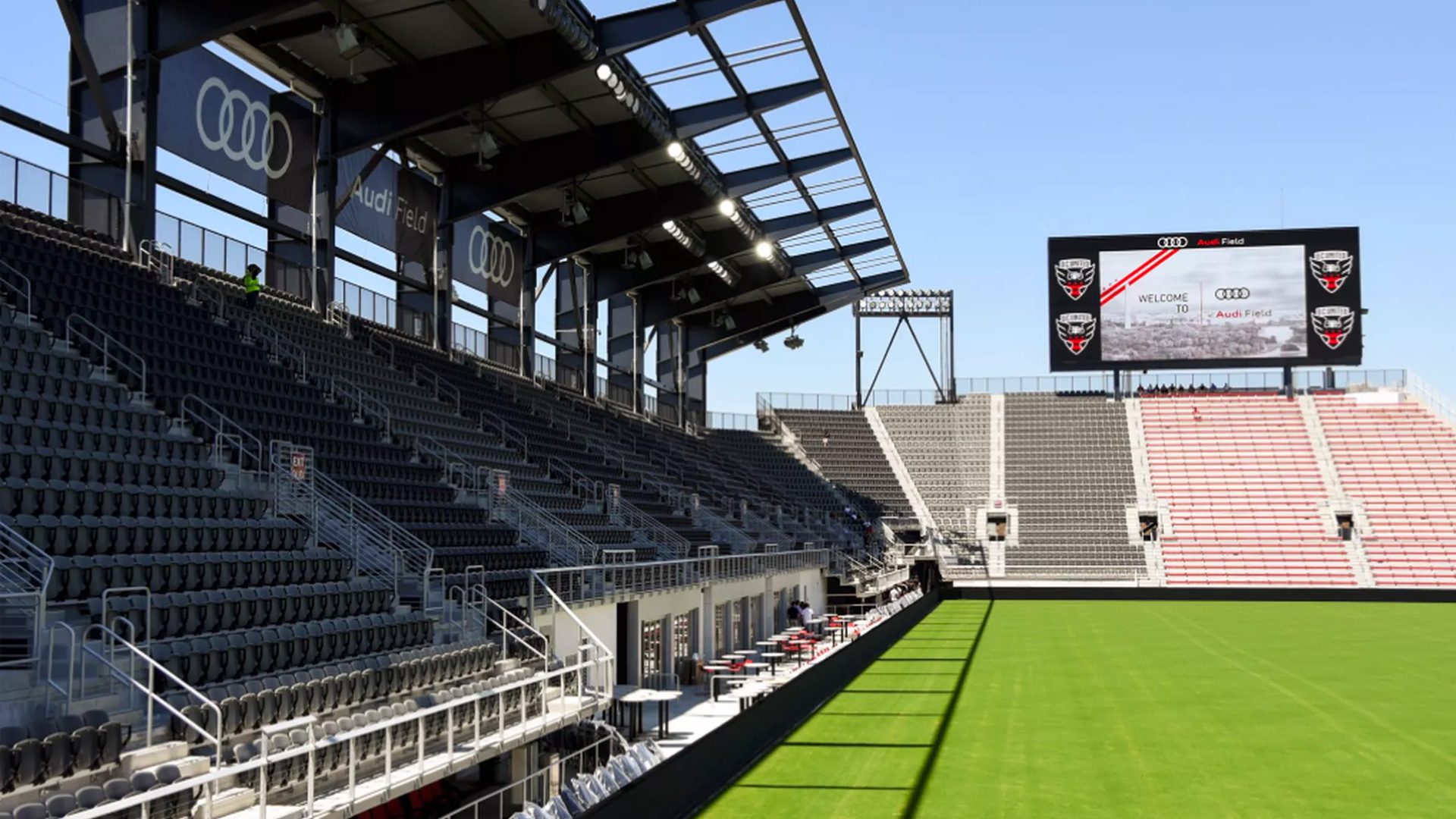 Team Store for D.C. United to open at Audi Field

By Moya Design PartnersJuly 9, 2018 No Comments

For D.C. United, the game is about to change. On July 14th D.C. United will debut Audi Field with an inaugural match against the Vancouver Whitecaps. Audi Field, a brand-new, state-of-the-art soccer stadium, will seat 20,000+ spectators at the intersection of the Potomac and Anacostia Rivers in downtown Washington, D.C.

Audi Field is the first step in a master redevelopment plan for the Buzzard Point neighborhood in southwest Washington, also home to Nationals Park. Providing retail space and a gateway to future projects along the Anacostia River, the long-term vision is to develop the area with shops, restaurants, and a waterfront promenade.

Paola Moya was the CEO of Marshall Moya Design, who partnered with Populous on the design for Audi Field. As part of the design team, Paola helped secure the contract/work, participated in meetings with stakeholders, and helped coordinate the details of LEED certification with EcoImpact Consulting. The firm was responsible for the design of D.C. United’s offices, official team store, and other interior spaces for the stadium.

“As a member of the design team—and a Latina from a country where futbol (soccer) is paramount—I am beyond excited to see Audi Field open its doors today!” Paola said. “I was thrilled to be a part of the creative team to deliver a new home for D.C. United and its fans—many of whom are fellow Latinos! It was an honor to work with D.C. United, Populous, Turner Construction, EcoImpact Consulting, and the regulatory agencies to conceptualize and coordinate the details of this environmentally-friendly stadium.”

Audi Field is the successor to RFK Stadium. Built in 1961, RFK Stadium was initially designed for football and baseball games, but in 1996 it also became home to D.C. United. From 1996 – 2017 RFK saw some spectacular moments in soccer. Over half a century after RFK’s inception, Audi Field will be a fantastic new upgrade. We look forward to United’s first game in their cutting-edge, dedicated home!

Todd Spangler, lead designer on the stadium and Associate Principal at Populous, characterized the structural design of Audi Field as “a tough challenge and a unique problem to solve.” Working with fewer than ten acres in a dense urban area, the solution was to create an “imposing intimacy” – using a tight footprint to bring forth a monumental building. The hope is to galvanize D.C. United’s fan base with a strong building that intimidates opponents. Paola Moya enthusiastically supports the grand opening: “As of today, D.C. has a new state-of-the-art arena for talented players and passionate fans to unite and celebrate futbol, which will truly energize the city. Vamos, D.C. United!”

Getting fans closer to the action is a major benefit to this design concept! The first thing fans will notice when they hit the stands is that Audi Field is both steep and compact. John Knight, Senior Principal at Populous, said, “Because the site is so constrained in the east-west direction, which is the width of the field, fans are going to be as close to the playing pitch as any MLS stadium.”

Some pitch-level suites are just eight feet from the field. The main concourse is also located at field level. Populous even created an opening near the main gate where fans can see in from outside. Another nod to spectators is a dedicated supporters section on the stadium’s north side. To maintain great sight lines, the supporters section is seated instead of standing.

The major asset of Audi Field’s Buzzard Point site is its proximity to downtown with spectacular views and the great potential of the riverfront. During her tenure as CEO of MMD, Paola Moya worked with the creative team to achieve a monumental complex well-suited to the needs of D.C. United and more. Audi Field will not only host Major League Soccer but also celebrity concerts and events.

Populous calls Audi Field “bespoke.” On first review, Soccer Stadium Digest reports: “The term seems to fit the new stadium perfectly. It is tailored to its uniquely small site, includes a wide variety of premium seating options within those parameters, and takes marvelous advantage of its context in America’s most iconic architectural city.”

In keeping with the “imposing intimacy” of Audi Field, the interior offers a soaring retail space where fans can feel the electrifying rush of on-field access. Abundant natural light illuminates the space with sweeping window walls. Gray steel, timeless concrete, and blue-sky elements evoke team strength and resilience, while the home team’s black and red colors create a sense of action that continues in the dynamic line of the retail counter. The resulting design provides an intimate, first-class shopping experience that will grow D.C. United’s fan base and engage long-time supporters with VIP front-of-house service.

The D.C. United Team Store is located at the northeast corner of the main gate at Audi Field. Be sure to stop by!